Tang Yin (1470-1523), one of the "Four Great Masters of the Ming Dynasty", Tang Yin, was hailed as the number one talented man in the south of the Yangtze River in the middle of the Ming Dynasty. He is knowledgeable and versatile, reciting poems and composing music, can calligraphy and painting, and has experienced ups and downs. He is an outstanding painter in the history of painting in our country.

Tang Yin is called Bohu, and is even more called Ziwei, the master of Taohua Temple, Lu Kingdom, Tang Sheng, Escape from Zen, Nanjing Jieyuan, Jiangnan No. 1 Talented Scholar, etc. Believe in Buddhism in his later years, there are six nicknames such as layman. A native of Wu County (now Suzhou, Jiangsu). Tang Yin was born in a merchant family and had a relatively low status. Under the leadership of the current "prominent relatives and fame", Tang Yin studied hard. At the age of 11, he was very talented in writing and wrote well. At the age of 16, he participated in the Nanjing Yingtian Township Exam at the age of 29 and won the first place in the "Jie Yuan".

Tang Yin's calligraphy is hidden by the painting's name, mainly from Zhao Mengfu, and also influenced by Li Beihai. He is handsome, charming and colorful, and his brushwork is mellow and free and easy, but the brush is slightly weaker, the hooks are soft and the structure is slightly loose. Therefore, Wang Shizhen commented: "Bohu enters Wuxingtang and has a weak ear." ("Zhoushanren's Draft") 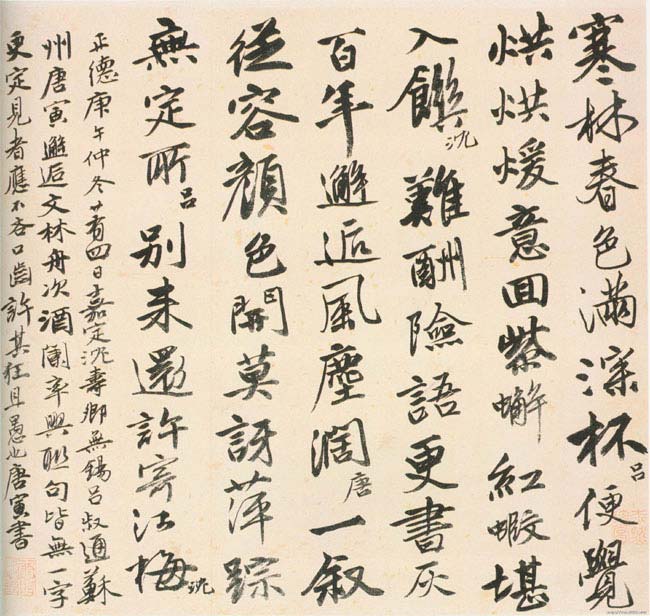 "Self-Book Lianju Poems" on paper. Collection of the Palace Museum, Beijing. The length is 30.2 cm and the width is 32.9 cm.

It is a seven-law poem composed by Tang Yin, Shen Shouqing and Lu Shutong, written in the fifth year of Zhengde (1510). His calligraphy is superb and beautiful, with a gentle and elegant calligraphy.