Wang Shouren (1472--1528) is called Bo'an, first named Yun, and changed his name to Shouren. Zeng Jianshe was built in his hometown of Yangming Cave, known as "Wang Yangming" in the world, and he was born in Yuyao, Zhejiang. Concentrate on Confucianism, and "get things to know" should be self-seeking, not all things, its knowledge has a huge influence, and it has become the "Yaojiang School", popular in Japan, good poetry, calligraphy, and popular works include "Seven Characters Quatrains (七言绝句)", "Seven-character Law Poem (七言律诗)" and so on. Wang Shouren is an outstanding scholar and a famous philosopher. His calligraphy is mostly cursive. "Seven Characters Quatrains (七言绝句)", cursive works, chic and elegant, smooth and round, the pen is vigorous and old-fashioned. It is deeply influenced by Li Dongyang's style of writing. , Got the bones of the right army. 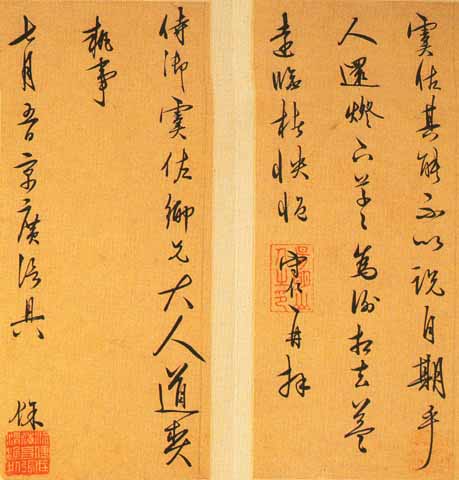 "The Cursive Notes (行草手札)". Handwriting. A total of 14 papers have been folded, collected by the Shanghai Library. Shouren handwritten notes circulated very little. This is his answer to Yu Zuo Shi Yu (namely, Zhejiang Press Envoy Tang Long). The calligraphy is very strong and ancient. The "Shouren" seal is signed with "Yangmingshanren's Seal", and the last sign is "July 5th Yu Guangxin Tools". When Ming Zhengde returned to Zhejiang from Nanchang in the 16th year. Another seal has the old seal of "spread in Haichang Zhangwei fishing place".