Wu Cheng'en (1506-1582) courtesy name Ruzhong (汝忠), was a Chinese novelist and poet of the Ming Dynasty, and is considered by many to be the author of Journey to the West, one of the Four Great Classical Novels of Chinese literature. Wu Cheng'en is good at painting, versatile, but the imperial exam is unfavorable, and it is the year of the year. At the age of 60, he served as Changxing County, and it was returned to the unmanaged, and the sleeves were returned. After hiring Jingshan Ji Shan. 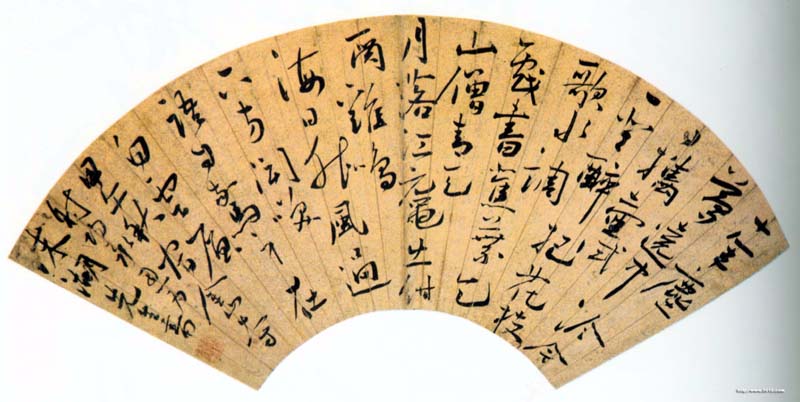 The fan of "Seven-character Law Poem" was written by Wu Chengen when he was thirty-five years old. Wu Chengen's spread of ink is rare, so it is a rare masterpiece. I wrote a poem: "Ten years of dust, dreams, and cold, try it today with a pot. Drunk, tune the flowers and sing the water, play the banana leaf and beg the mountain monk. I heard the laughter from below, and I was shocked by the white clouds." Section Office: "Jinshan Temple in the Autumn of Jiawu, Sheyang Chengen wrote for Mr. Mohu."