Xing Tong (1551-1612) Ming Dynasty calligrapher and painter. The word Ziyuan was from Linyi (Shandong). In the 2nd year of Shenzong Wanli (1574), Jinshi, official to Xing Taipu Temple Shaoqing. Work script, can write big characters at the age of 7, and later learn Wang Chong's regular script. When he was admitted to Jinshi at the age of 24, he wrote superb calligraphy for the exam, which aroused the surprise of the judges. At the age of 30, he resigned and returned to his hometown, and built a poultry house on Guli Hill to receive guests from all over the world. The family collection is very rich, and he has copied the "Laiqinguan Tie (来禽馆帖)" from his own copy. Among them, the "Seventeen Tie (十七帖)" is the most famous. The calligraphy draws on many strong points, and the main method is based on Wang Xizhi, the pen is strong, and the smell is pale. Together with Dong Qichang, Mi Wanzhong, and Zhang Ruitu, they are collectively known as the "Four Families at the End of Ming Dynasty", and they are called "North Xing Nan Dong". Shi Zhou’s scholars commented on his book: "The second king of Yanjing (Xizhi, Xianzhi), the brushwork is always like the meaning of "Seventeen Tie (十七帖)", that is, it is written by silk, and it is also written by Wang Tie. "It is also said that the style of writing in the Wei and Jin Dynasties had been underestimated at that time. However, Xing Tong "abolished the bad habits alone, and traced the restless, no matter what his essence, that is, his ambition, he was already superior to humans." The fist writing, stone sedge, long pine and bamboo, the brushwork is ancient and smooth, and the embellishment is clear and sparse, which is probably imitating the brushwork of Wang Mian and Wang Meng in the Yuan Dynasty. Also write Mozhu, Zongbei Songwen same school. He is also good at poetry and author of "Lai Qin Guan Ji (来禽馆集)". Xing Tong's calligraphy is deeply rooted in Wang Xi's spirit, and his works are cherished at home and abroad. 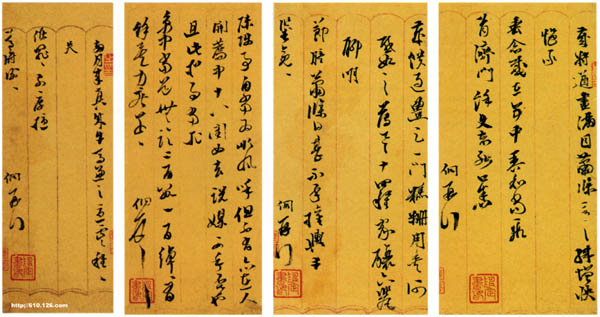