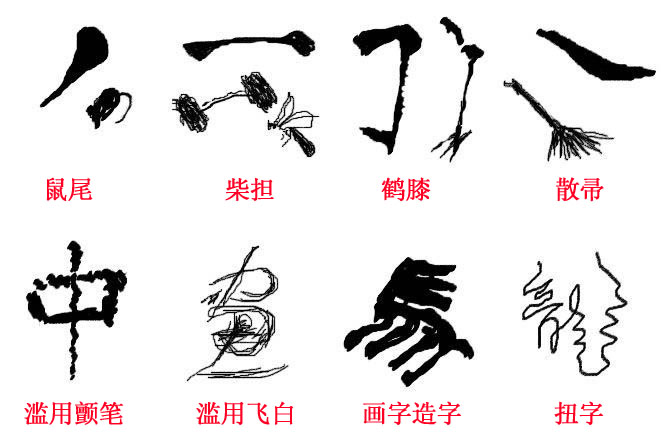 1. Bull head. It looks like a bull's head. The main reason is that there is too much ink in the pen, causing excessive ink swelling. Or the pen is turned too hard, the press is too strong, and the strike is too fast, and the strike is severely ill. Therefore, when writing, it is not advisable to moisten the pen too much, and the pressing force should be limited according to the size of the word.

2. Rat tail. It often appears on skimming, it looks like a mouse's tail, and it doesn't look good. The main reason is that the pen is weak, floats on the paper, and slips away. The brush is not lifted or pressed when it is running, and must not be caused by the essentials of using the brush. For writing and painting, the pen should be calm and the downward pressing force should be even. The tip of the pen should be sent to the top. The transition from thick to thin should be slow and natural. The center should use the pen.

3. broom. When drawing and closing the pen, there are too many scattered fronts, and there is no return front, and the scattered fronts are like broomsticks, hence the name. If you return through the Tibetan front, the front of the pen will be sent to the end, and the front will be lifted to close it. If you still can't change the "broom" state, it is recommended to change the brush.

4. Bamboo joints. The stippling is like a bamboo knot. This is due to the vague understanding of the shape and quality of the dot painting and improper use of the pen. Observation shows that the reverse direction of the next stroke is not correct enough, the stroke of the stroke is very blunt when the stroke is shifted, and the middle stroke is too upward, and when the stroke should be raised, the stroke is pressed down, which makes the stippling out of shape and blindly creates corners. "Bamboo" is a faulty pen in most regular scripts, but it is used in some Wei stele scripts.

5. Bee waist. This kind of diseased pen appears in strokes such as curved hooks, vertical paintings and horizontal paintings. The two ends are round and thick, while the middle is soft, like a bee waist. The occurrence of this kind of bad pen is often caused by over-pressing at the beginning and end of the pen, not paying attention to the movement of the center forward, resulting in an imbalance between the middle and the two ends. Therefore, when writing, you should lift and press steadily, with a balanced force, and a natural front.

6. Crane knee. The feet of a red-crowned crane are long and thin, while its knees are round and thick, which is very characteristic. People call the stippled pens with thin and soft lines, but round and protruding places at the turning and standing pens, which are called "Crane Knees". In order to avoid this situation, it is required that the inertia should not be too large when starting or ending the pen, turning or horizontal hooking, and there should be no too much circular turning and downward pressing force, and the front movement of the pen should not be too large when the pen is stopped or stopped. Keep the posture on the original post and accept it as soon as you see it.

7. Nail head. A nail head is different from a bull head. It is like a nail with a big head and a small body. Generally refers to the loss of control, caused by one's wishes. This situation should be avoided as much as possible.

8. Folding wood. The end of the finger-stroke drawing looks like a broken piece of wood. It is jagged and blind. It completely violates the rules and requirements of the drawing-end pen. When using the pen, there is no backlash, but the book is gently lifted and swept away. Therefore, when writing, you must be able to bear your breath, be calm, and deliver your pen and pen.

9. Chai Dan. The appearance is similar to that of a bee waist, but it is not a "bee waist disease". To be precise, it is a "chaidan" or a "piandan". The two ends are thick and the middle is thin. The difference is that the entire stroke has a larger curve, and most of this type of brush is horizontal. Therefore, you should reverse into the folding front and run to the right. The main force is flat and horizontal. Do not press down too much. When you make a slight bend according to the needs of the body, do it in moderation, not too much, and return to the front. Pay attention to the law.

10. Jagged. Sawtooth pens are generally caused by improper use of skews, and most of them are sketchers. If you don't pay attention, other stipples may also have "jaggies". Its main characteristic is that one side is smooth, one side is toothed, and there are also sick pens with jagged sides. To overcome this phenomenon, it is necessary to emphasize the use of pen by the center.

11. Sharp edges. The pen strokes are too sharp, resulting in the stippling with sharp corners, teeth and claws, losing the sleek and subtle characteristics of stippling. Remember the principle of "reverse entry and exit", you can have both directions, but you can't have "sharp edges."

12. Hairline. This disease is prone to appear in knots with many stipples. His stippling is too slender, as soft as hair, and the brush is only lifted and not pressed, lacking strength and change.

13. Vertical tail. The strokes of the strokes should finally be lifted up accordingly, and they appear full of spirit, full of images and gestures. If the force of the pen is downwards and slips out, it will cause "vertical tail" disease. The foot stroke is a very important main pen in regular script. When the brush is kicked out in the Zhui pen, the twisting and pressing action should not be too large. During the pressing and lifting process, the upper edge should be kept straight, and the lower edge wrapped and lifted up. The pen strength must be in place to maintain the beauty of the feet.

14. Shrug. Different from the crane knees, the shrugs are mainly square folds, although they have the "folding taste" of regular script, but they are too high and pretending to be posture, and they are too far apart from the vertical paintings below and cannot transition naturally. It also loses its proportions with the horizontal painting on the left, and cannot achieve harmony and consistency. Therefore, you should pay attention to it when writing, and take precautions.

15. Off shoulders. At the turning point, the pen is broken, and the pen is disconnected, and it is not related to each other. It is both "shrugging shoulders" and "shouldering", which is the opposite of "shrugging shoulders". Severe distortions in the shape and appearance of the pen for shoulder-off disease are caused by lack of reading and lack of copying. Lack of knowledge about the shape of the body, so you must read the post carefully when writing, know how to advertise, master the skill of inter-frame combination, and avoid such ill pens.

16. Willow leaves. The strokes resemble the shape of willow leaves, commonly known as "willow leaf disease". Generally speaking, this is not allowed in regular script. In Yan Zhenqing’s "Qin Li Stele" post, some of the long curls are thick in the middle of the two ends, but they are natural in transition and have little contrast. They have the characteristics of long curls and beautiful images. , There is a fundamental difference between the two. The stippling became a willow leaf shape, and it became sick. Therefore, in the temporary study, you must enter the post, and in the post creation, the stippling should be more vigorous and beautiful, and the shape is beautiful.