Four Elements Of Cursive Script And Basic Techniques (With Photos)

It is said that cursive script is difficult, so it is not difficult to master these 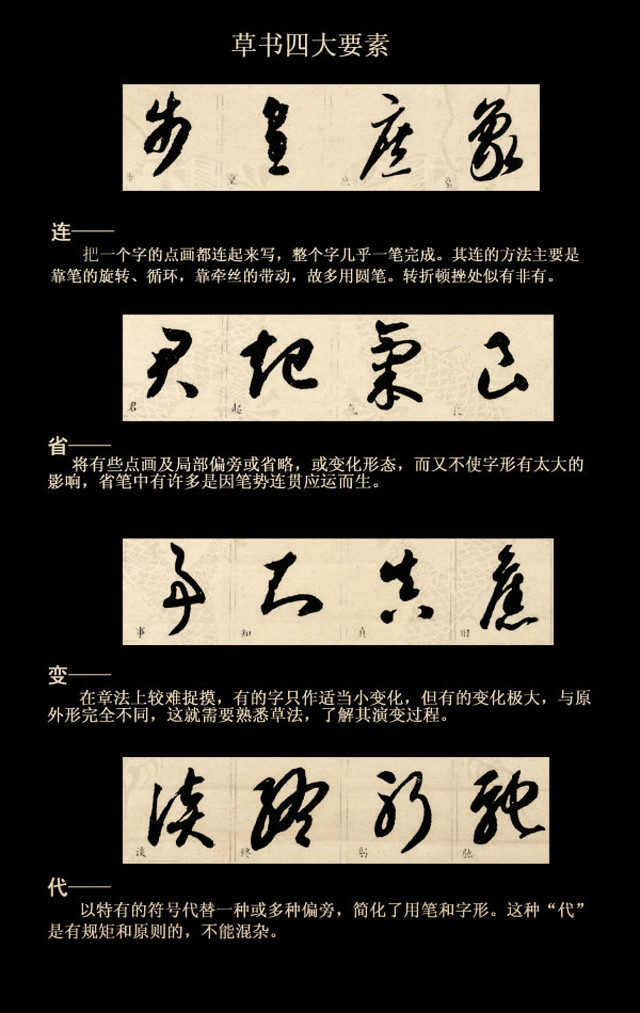 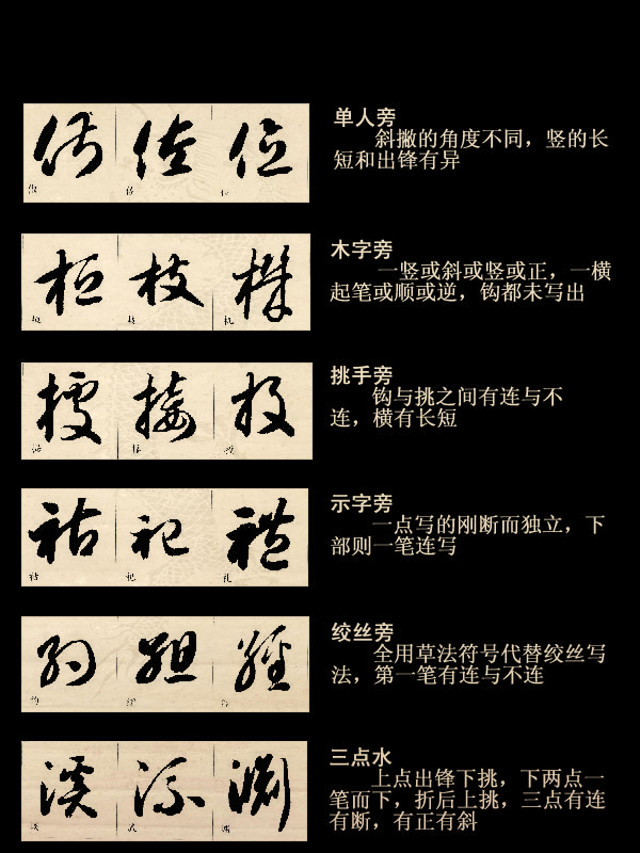 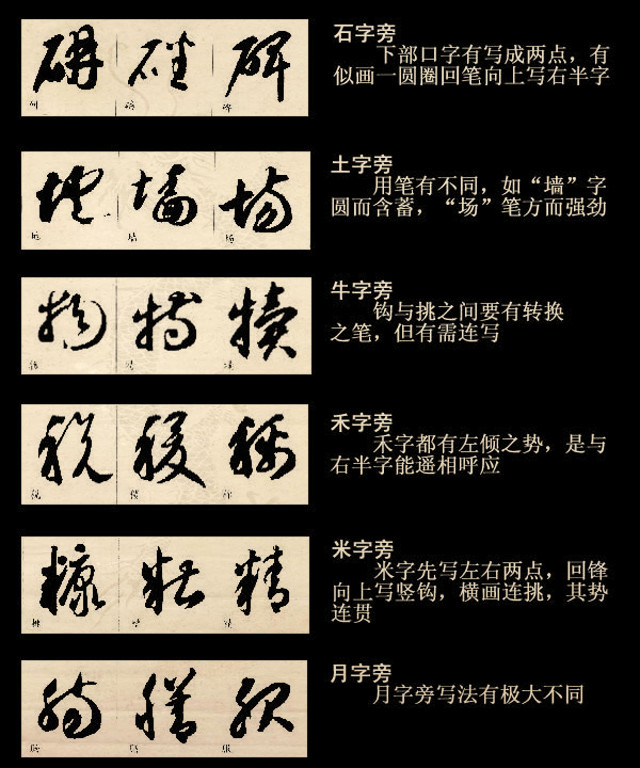 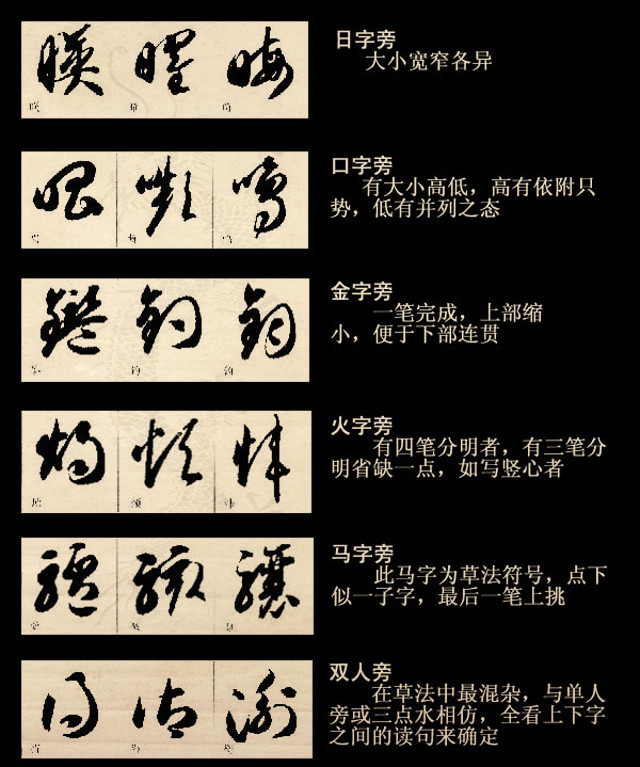 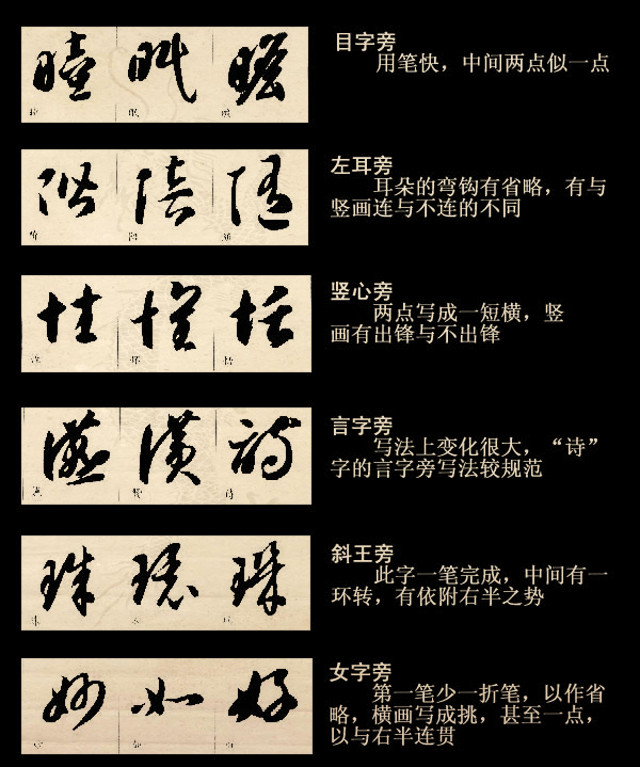 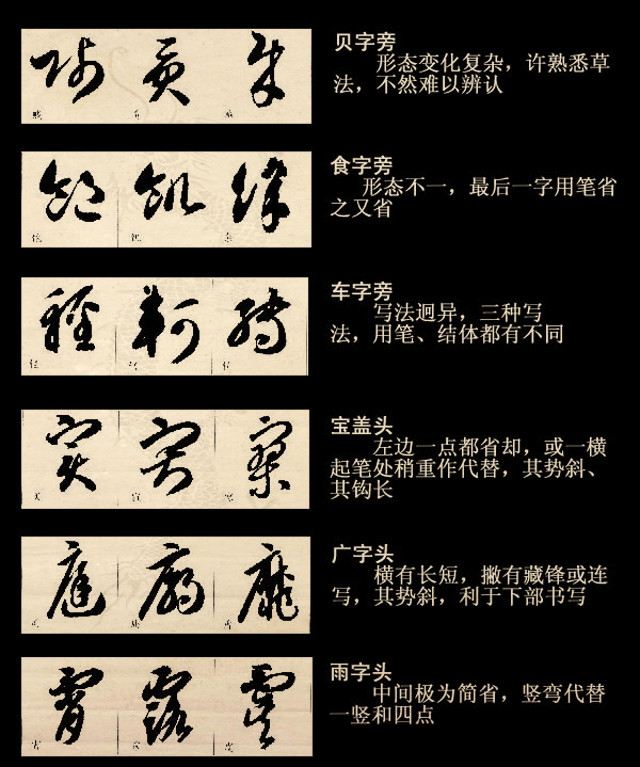 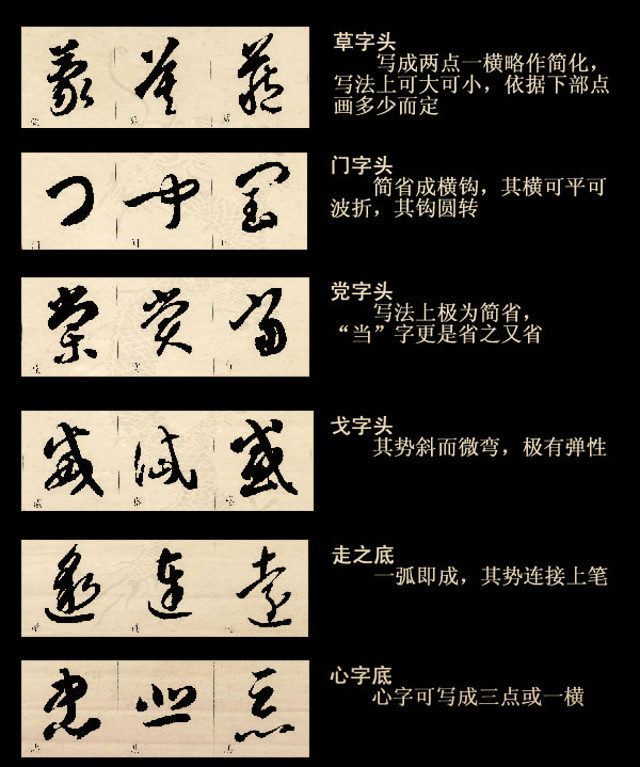 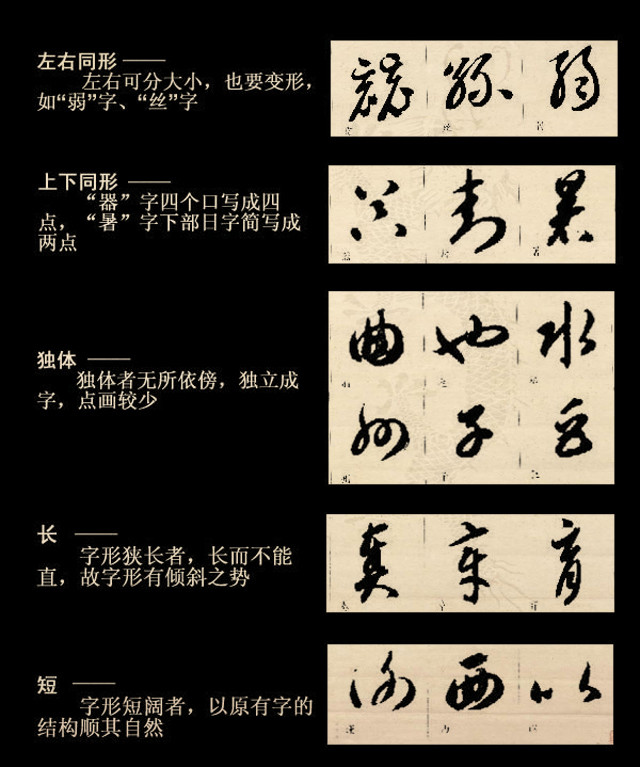 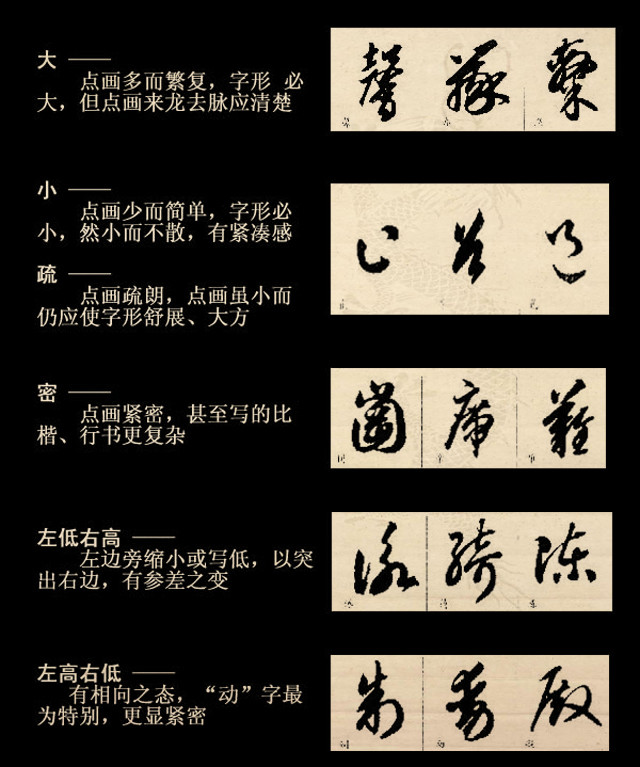 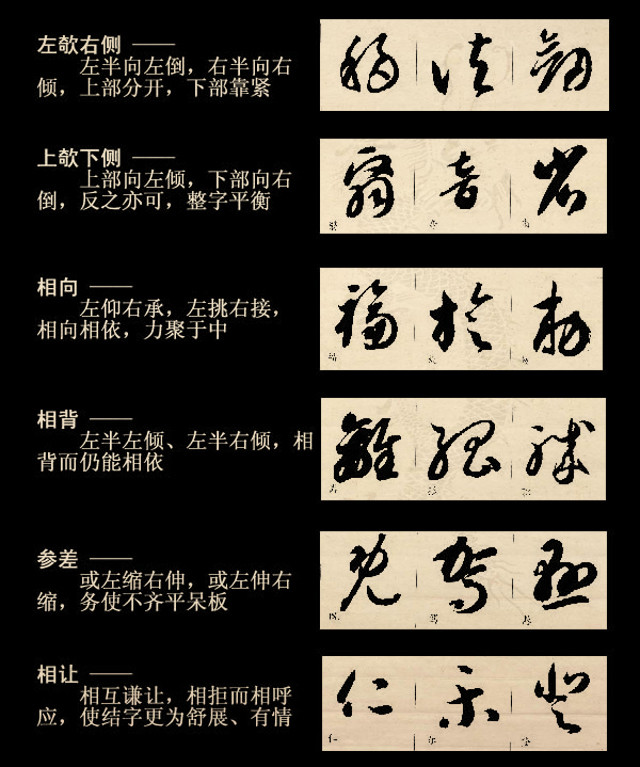 If the structure of regular script is used as the standard, the primary characteristic of cursive script is simplicity, and the strokes are province and province, simple and concise. Sun Guoting said: "The cursive is based on the form and quality, and the stippling is the temperament. That is to say, the composition of the cursive script is mainly composed of the Zhuan, and the body and momentum of the characters are formed by one stroke. "It makes it horizontal and vertical, with edges and corners. Therefore, the movement of cursive stippling lines is mostly arc-shaped. This is the inevitable method of using brushes due to the fast and smooth strokes. The continuous numbers in cursive script are a single stroke, and the line Involvement is constant, sometimes two or three characters are connected together, it is difficult to break the word, the shape changes are extremely strong, the various pitches, densities, backs, and surrenders, the contrast can be exaggerated to an astonishing level. The question is not whether it is continuous, but it is connected. Whether there is the meaning of breaking at the turning point in the process, the value is that it seems to be broken and connected. Therefore, although the cursive script of the great calligrapher Wang Duo in the late Ming and early Qing dynasties is often continuous, it is still for later generations because of the explanation of his pen. Weighted.

The cursive style is for simplicity, and its radicals are replaced with symbols, which greatly changes the form of cursive stippling, which is quite different from that of regular and running script. This is the characteristic of cursive style. However, cursive script should also be subject to the rules established by the cursive law. The cursive law has strict rules. You must never draw a symbol by hand and do whatever you want. The saying goes: "The cursive script is out of style, and the gods don't know." The cursive style cannot be out of style. It's the rules. Ge Shouzhi's "Hanxi Calligraphy General Explanation" said: "Cursive script is not difficult to be mad, and it is difficult to not violate the pen intention in madness." Therefore, calligraphers have always pointed out that writing cursive script requires a solid basic skill in regular script. Zhao Gou's "Han Mo Zhi" said: "The predecessors were able to write and then cursive, and the two methods of writing are indispensable. The formality is elegant and solemn, and the structure is decent. If the minister crowns the sword, the grass will rise up and the phoenix will rise. , Zhenxun's pen power, outstanding heroic deeds, and ultimately not distorted." There is no one who can rush to write without a regular script, but Sun Guoting said it well: "If you don't understand the truth, Xi Cao will be fascinated."

3. Seeking overall balance instead of symmetry

Generally, the knots of Kai, Xing, and Li scripts are balanced, symmetrical, and coordinated. Using the law of unity of opposites, the knots can be dense and dense, and the length, narrow, wide, stretched, odd and straight, pitched, and backward, etc., make the knots. Can lengthen and short, stop evenly on all sides. However, the structure of cursive script does not follow the principle of symmetry, but depends on the change of the writer's inner mood. Generally, cursive scripts are ignorant of righteousness and symmetry, pursuing the beauty of imbalance, because the imbalance and unevenness make the characters more turbulent, and turbulence is the key to cursive script, especially the big cursive, even if a character loses its power. Leaning to lose the center of gravity, you can also use your wrist strength to lean to the other side in the following words to balance the entire structure. Therefore, the cursive style is not about balance, but the pursuit of the overall effect without losing the center of gravity. Chinese characters are made up of different stippling and paintings. Calligraphy is a combination of Chinese characters stippling and arranged. The length and the weight are different to make the artistic image magnificent and intriguing. The only rule that should be followed is the focus of the word. Balance. Anyone who can hold the center of gravity in the structure, no matter how unique the conception, how dangerous the combination, is consistent with the principle of structural beauty, change and balance are contradictory, but the artistry of the structure also arises in this contradiction.

The distinctive style of calligraphy works is often reflected in its unique structure. Each calligrapher has its own structure. Some are flat and fat, some are thin and long; some are sparse, some are tight; some are slant, some The dignity of people often lies in their ability to act against the way of others. Long shortening, short elongation, square oblique, oblique flattening...Boldly conceived, comprehensively balanced, surprisingly successful, unconventional, and can create a new look that is natural in form and in line with the general principle of balance. Come, you can also reflect your personality. Therefore, structural change is the most effective way to reflect individuality, and balance is the principle of structural change.

The structure needs to be changed, but avoid falling into the clichés of focusing on the structure. Anything that incorporates the art of calligraphy into a fixed pattern and distorts calligraphy into parts that have no emotions is a matter of seeking the end, and will lead to a dead end. Wang Xizhi has warned us a long time ago: "If it is straight and similar, like an operator, the top and bottom are neat, and the front and the back are flush, it is not a book, but it is a bit of an ear." , Is really vulgar, and those crazy and strange works that are tweaked, pretend to be big and small, move stippling by a large margin, and are seriously out of proportion, are unreasonable, unnatural, and undesirable. Transformation, stubbornness and rigidity are both undesirable, and they are all misinterpretations of "change" and "balance." In terms of the style of each person, Sun Guoting’s boldness and stubbornness, Minangong’s unrestrained rise, Zhao Mengshun’s graceful and straightforward, Huai Su Kuangcao’s madness, the temperament of the brush are very different, and the structure is very different. Change can always contain danger in peace, there are strangeness in peace, and strangeness. Its structure is born out of the use of a pen, so it is also called "the structure of using a pen." The structure of the pen is alive, because it comes from the movement of the center of the wrist, so it can not lose the center of gravity, and there is no mechanical hard-wearing; because it comes from the center with the pen, it can draw lines without breaking the rules. The inner quality of the characters is good; because they come from the changes of the strokes and brushstrokes, they have different postures and different temperaments, which can capture the spirit of calligraphy art.

Cursive style focuses on change and randomness. Of course, the standardization of cursive style is also very strict, but there can be multiple cursive styles for the same character, and there are many variations. The big cursive knot can be described by the four words "mysterious and unpredictable", with greater freedom. The degree of freedom is not arbitrary, but it is actually more difficult to grasp its correctness. The irregularities of cursive script come from the rules, and irregularities arise from the rules. Irregularities are always more difficult to grasp than regular ones. Because of their irregularities, they can break through the ordinary and give people a sense of thrill. But because it contains rules, it feels very generous and smooth, the pen and the pen are subordinate, the words are eager to look forward, the words are sentimental, there are sounds outside the strings, innocent, natural, and vigorous. It not only complies with the laws of nature, but also breaks through the conventions. It also makes sense, giving people endless aftertaste and imagination.

The deconstruction and combination of cursive script originate from the writer’s artistic conception, heart rhythm and emotional catharsis. In a word, art comes from thought, and thought is regulated and influenced by traditional philosophy, ethics and morality, social environment, personal experience, etc. , But also need a rich imagination. China’s oldest and most esoteric philosophical work, "The Book of Changes", profoundly elaborates on the Eight Trigrams, and the Eight Trigrams are the deconstruction and combination of lines, from eight three-line shapes to sixty-four six-line shapes, these sixty-four The combination is composed of the most basic two lines, one is a complete horizontal line, and the other is a horizontal line that is divided into two in the middle. The foundation of everything is a single thread. Lao Tzu said in the "Tao De Jing": "One life is two, two is three, three is all things." That is, all things are born from one, starting with one, and the composition of calligraphy is also based on a single thread. Above, the great painter Shi Tao said: “One painter is the foundation of all, and the root of all things.” Zheng explained the same truth. One painting determines the production and structure of Chinese characters and gradually evolved into the art of calligraphy. The deconstruction of a painting can analyze the reverse, forward, twists and turns, straightness, back-to-front, front-out, break and connection, etc. of a painting. The changes in a painting can be heavy and light, dry and moist, thick and thin. , There are soft and strong, strong and weak, thin and fat...Different styles can be formed by the change of a painting. Of course, the combination of a painting is ever-changing, and it becomes a composition of words. In calligraphy, there is a distinction between "one extension straight down" and "non-one extension straight down", and this combination produces two major schools. The difference is only in one painting. Looking at the art of cursive calligraphy in this way, the lyrical consciousness of madness, the agitation and exposure, the momentum of the pen and the dragon and snake, is to develop the line change to the highest peak, and it is people who use their own madness to make the most unrestrained performance with the help of the line. The mad cursive writer can take the deconstruction of a thread and the change of the combination to the extreme, reaching the point of being irrational and ignoring the work. The essence of artistic creation lies in the release of the author's spiritual power, and this release, nine-nine-one, relies on the thread of the beginning of all things in calligraphy.