Wenjia (1499-1582) character Xiucheng, number Wenshui. Born in Changzhou (now Suzhou), the second son of Wen Zhengming, Zengguan and Zhou (now Hexian, Anhui) learned Zheng. He is good at painting landscapes. The brushwork of landscapes has the meaning of Ni Zan's cleanliness, and he is also quite beautiful, imitating Wang Mengyan. Concurrently with flowers. He is good at composing poems and is good at identifying ancient calligraphy and painting. He has authored "Hezhou Poems (和州诗)", "Qianshantang Calligraphy and Painting Records (钤山堂书画记)" and so on. The stone carving is the crown of the Ming Dynasty. However, calligraphy is not as high as painting. Ming man Wang Shizhen commented: "The book cannot be like a brother, but the painting can be drawn as one (Wen Zhengming)." Zhan Jingfeng also said: "Jia Xiaokai is light and refreshing, like a thin crane, and the evacuation of a little bowel movement will not end. The same is true, none of them will catch his father." Of course, Wen Jia has been pursuing it all his life. After Wang Shimao said in "The Nineteen Ancient Poems of Postscripts (跋文嘉书古诗十九首)," he said: "Xie Cheng's late book is admirable, and it will hardly reduce Jing Zhao (Zhu Yunming)." 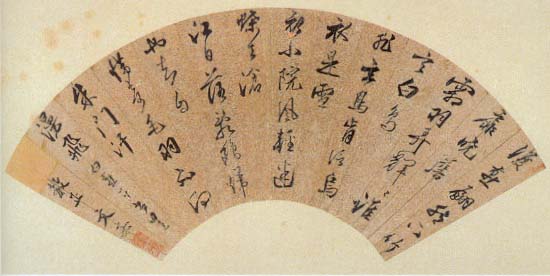 Running script fan from the collection of the National Palace Museum, Taipei

"Seven Jue Poems" in running script, scroll on paper, 121.3cm in length and 25.3cm in width, collected by the Palace Museum, Beijing

"Seven Poems (七绝诗)" is 3 poems written by Wen Jia. The calligraphy is pure and beautiful, simple and clean. Throughout the strokes, the strokes are round and slender, and the strokes are oblique, straight, continuous, light, heavy, virtual and actual. The body stance is sparsely and densely intertwined, and more inclined. Wen Jiashu was influenced by his father Wen Zhengming's style and changed again. (The information comes from the website of the Palace Museum. Writer: Fu Hongzhan)