Xu Lin (1462-1538) has the word Ziren, the word Ziyuan, and the name is Shanxian and Libo, the other is Jiufeng Taoist, and Kuaiyuan is an old man. A native of Huating County (now Shanghai), Songjiang Prefecture in Ming Dynasty. He lost his father at the age of 6, and lives with his brother in Nanjing. 7-year-old can poem, when he was called a strange boy. Good calligraphy, can write big characters at 9 years old. The 14-year-old middle-aged scholar was immediately accused of being falsely accused. So he devoted himself to the creation of calligraphy, calligraphy and opera. Block letters enter and exit between Ouyang Xun and Yan Zhenqing, and Zhu Huiweng in big characters is almost chaotic. Later, I like to copy Zhao Mengfu again, and his pen is strong, the structure is prudent, and he is a family. You Jing's seal characters are extremely accomplished. At that time, Li Dongyang and Qiao Yu, who were known as the "sages of seals", saw the seal characters written by Xu Lin, and they all sighed and regarded them as the "first in the contemporary era". As far as North Korea and Japan, they all competed for their ink, which is regarded as a treasure. The book "Thousand-Character Scrolls" (divided into cursive, regular script, and seal, now in the Palace Museum) has a jade and lovely font, a strong and ancient pen, and a brilliant expression. He also painted things carefully and was friendly with Shen Zhou. The landscapes and flowers are all vivid and vivid. The handed down works include "Ammonites and Hare Picture (菊石野兔图)" (now in the Palace Museum), "Early Day Flat Peach Picture (初日蟠桃图)" (see "Chinese Famous Paintings of Past Dynasties (中国历代名画集)").

composes music, is good at metric, "can make a new sound by himself", and is well-known overseas. In the fifteenth year of Zhengde (1520), Wu Zong made a tour of the south. He was recommended to be a composer for the emperor, bestowed a clothing, and visited his home many times. He was ordered to follow to Beijing, but due to Wu Zong's death, he returned without being granted an official. He is the author of 8 legends and some Sanqu, including "Xiuxianji (绣襦记)", "Liuxianji (柳仙记)", "Shangren Sanyuanji (商辂三元记)", etc., and is known as "qu altar sacrificial wine". 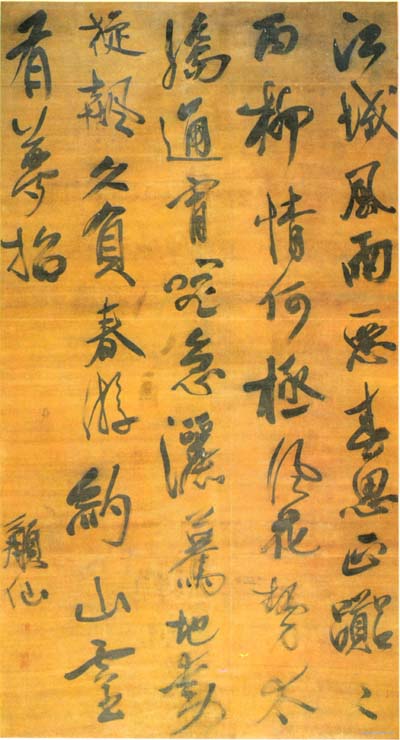 Five-character Rhythmic Poem in Running Script, on silk, where the five elements have 42 characters 198.6×106.2cm. Collection of Nanjing Museum.

Critics believe that the book "Five-character Rhythm Poem" is majestic and handsome, with softness in rigidity, and the meaning of seals. 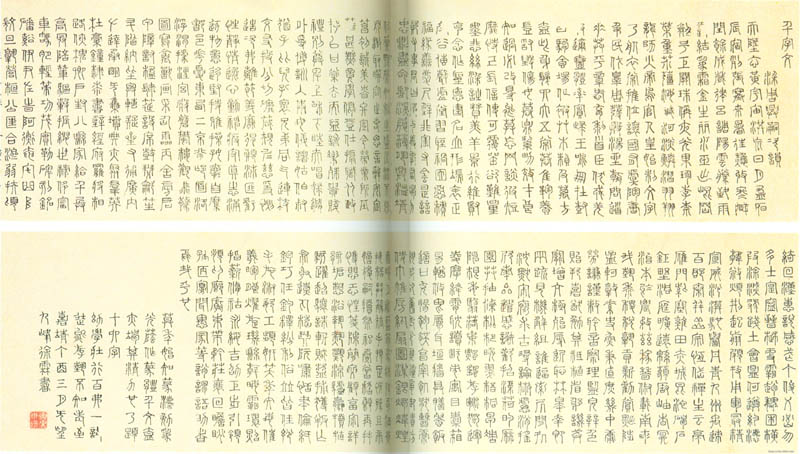