Oracle, big seal, and small seal are all seal scripts. The calligraphy materials related to the period from the Yin and Shang Oracle bone inscriptions to the Qin Xiaozhuan period are limited to inscribed inscriptions and stone inscriptions. There is a big gap between this form of writing directly with a brush. There is no discussion about whether the brush pen was used in the pre-Qin period of the bronze inscriptions, but only to say; until now, there are no preserved seal script materials that were directly written by the brush at that time.

The seal script uses less dots, and is often connected with other strokes, as a part of other strokes, or extended into short horizontal or short vertical. There are fewer individual dots, and the writing method is: start the pen from the center of the dot, rotate from left to right, and move the pen while turning, until it turns into a circle and then close the pen. However, Deng Shiru's points are extremely varied, and the points of the same word in the same work are handled differently. See (Figure 1) the different ways of writing the dots in the three "太" characters. 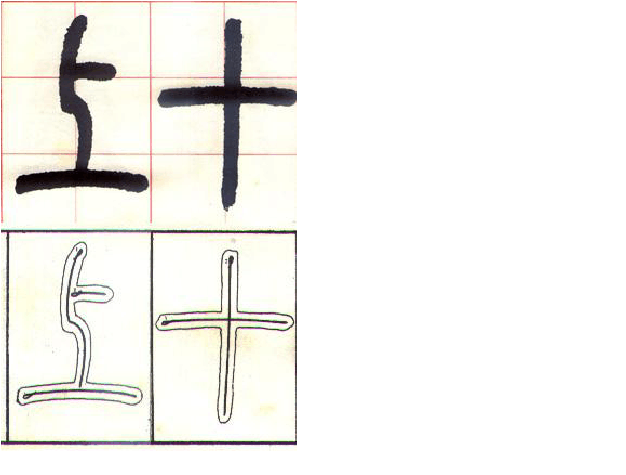 The arcs in the seal script can be divided into angular arcs, semi-circular arcs, circular arcs, square arcs and irregular arcs. Except for some irregular arcs, arcs are written by two pens. Take circular arcs as an example; pen strokes are basically the same as horizontal or vertical pen strokes. Start with the tribal pen above the circle to be written, and first write a semicircle to the left. Then write a semicircle to the right from the head and tribal pen of the upper stroke, and meet below the circle, leaving no traces at the overlap of the meeting. (Picture 3) The two arcs at the upper part of the Chinese character "大" and the two arcs at the lower part of "Zhu" are both written in two strokes. (Picture 4) The arc above the character "月" is written in two strokes, the arc at the bottom of the character "月" is irregular, and the arc "多" is written in one stroke. 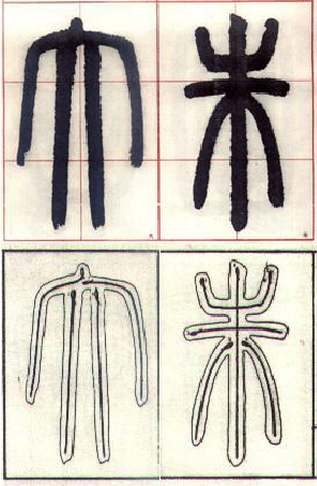 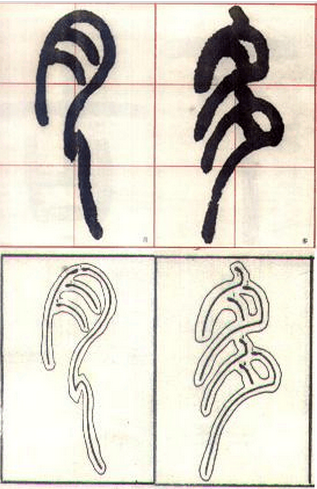 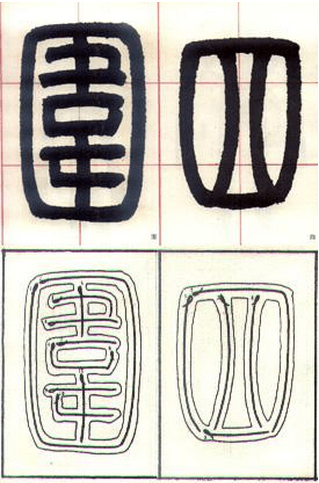 (Picture 5) The outlines of the characters "Wei" and "四" can be divided into two strokes or three strokes. Although it is the outer frame, it is also curved. 2. Deng Shiru's method of starting and ending the seal script:

Conversely, pay attention to introverted and reserved; or reverse inward and flat out, relaxed and smooth. Conversely, the two ends of the painting are perfectly rounded, as shown in the two paintings on the upper part of the character "Gong" (Figure 6). Inverted in and flat out, the beginning of the pen is round and thick, and the end of the pen is slightly pointed, such as "too" (Figure 6). However, the collection of seal scripts is still mainly Tibetan, and occasionally reveals the spirit to show the spirit. 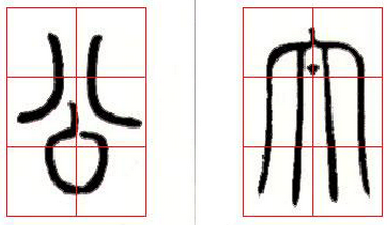 Third, the method of pen transport: 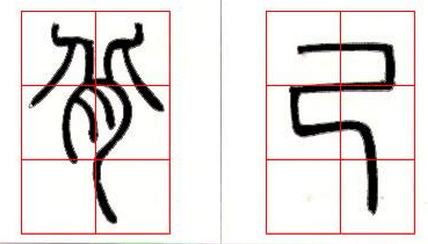 Fourth, the processing method of the line relationship: 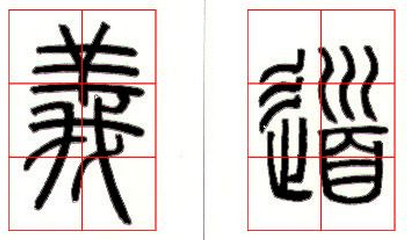 2. Hug and contradictory relationship: The curves in seal script are mostly dealt with by hugging and contradictory. For example (Figure 9) "Lai", the curves on the left and right of the middle straight line are all handled with the embrace relationship; while (Figure 9) the curves around the "Empty" are arranged with opposites, in the middle of the word They are often used at the same time as each other, in order to achieve the effect of complementing each other. For example (Figure 10) the outer two curves of the word "and" embrace each other, the inner two curves are opposite each other, and the left two curves and the right two curves respectively form an embrace relationship. (Figure 10) The curves in the lower part of the character "Zhan" constitute the opposite and embrace each other respectively. 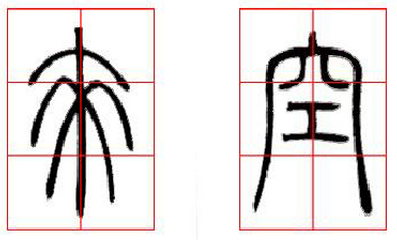 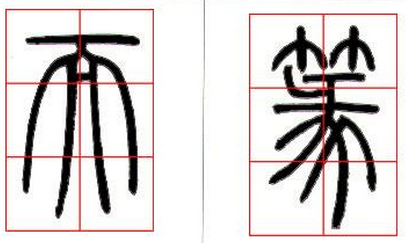 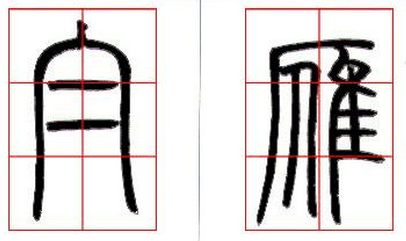 4. Symmetrical relationship: Symmetrical treatment of lines is an important feature of seal script. Such as (Picture 12) "不" and "去"; (Picture 3) "大" and "朱". Although it is symmetrical, it is not absolutely the same on both sides. We can still see the changing and dynamic symmetry. 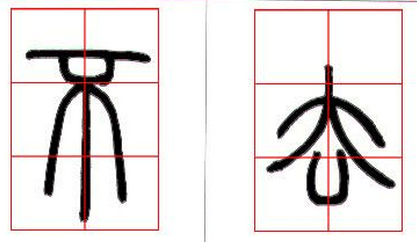 Fifth, the method of distributing white

1. Uniformity: Uniformity is the pursuit of the seal script. The method of parallelism and symmetry in the lines is closely related to this. For example (Figure 13), the blanks between the horizontal lines of the word "quantity" and the blanks on the left and right of the center line are almost the same. (Picture 13) The blank spaces at the upper, lower, left, and right of the character "nai" are almost the same. 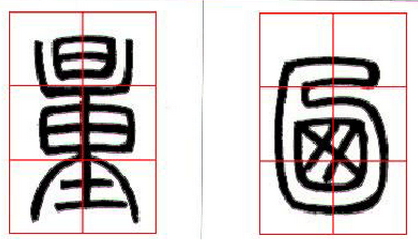 2. Top dense and bottom sparse: In addition to the uniformity of the white space between the lines, the seal script also pays attention to the change of density. In most cases, Xiaozhuan adopts the arrangement method of dense top and sparse bottom. For example (Figure 14), the words "heart" and "huang" are all dense and sparse. 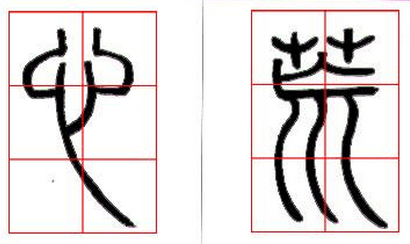 3. Top sparse and bottom dense: In the seal script, the strokes of some characters are stretched upwards. In this case, in addition to the unevenness of the paintings that stretch upwards, the white space is handled with sparse top and bottom dense. method. Such as (Picture 15) "之" and "世". 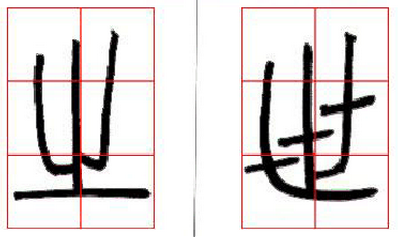 6. The method of structure;

1. Let it be: (Picture 16) "Evil" and "stupid" are up-and-down structures, and if they are not handled well, they tend to feel separated from up and down. When handling the structure, the upper part expands outward and the lower part enters, so that the upper and lower parts can be integrated. 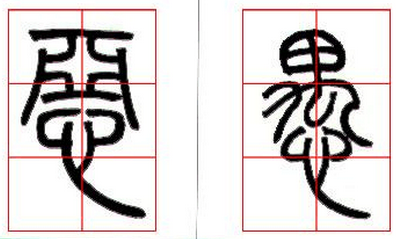 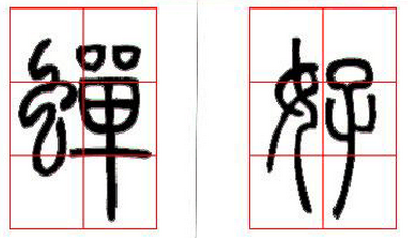 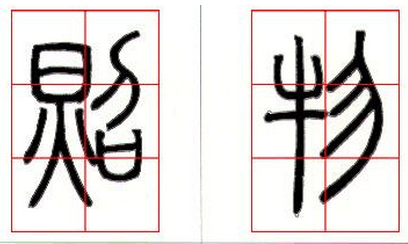 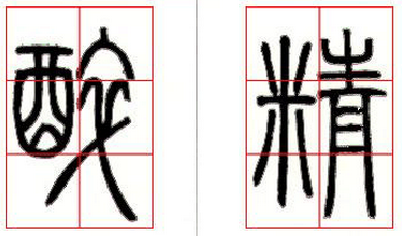 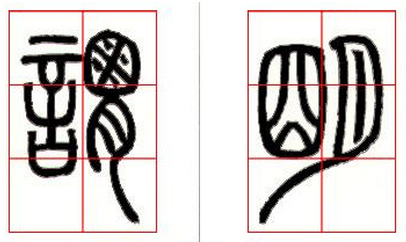 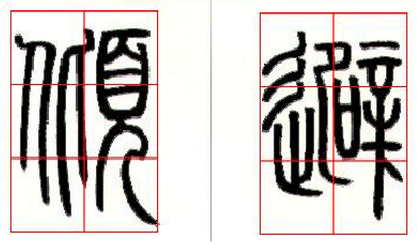 6. The quadrangular shape encloses the entire space: in (Picture 5), the word "surround" and the many horizontal paintings divide the space neatly, so that the blank space becomes comfortable and bright. This is also extremely important in the structure of the seal script. (Picture 5) The two verticals in the "four" in the middle are curved outwards in a back position, in contrast to the vertical paintings on the outside, which are gathered by the horizontal paintings at the bottom, and the brushwork is beautiful and lively.